Shuffling into Serial -- Behind the Libraries Part Five

We're slowly understanding various parts of the Arduino Uno and, more specifically, the ATmega328p chip. Next on the agenda are the various Serial commands we used, such as Serial.begin and Serial.print.

Before we learn how to do serial communication without using the Arduino libraries, firstly we need to learn how functions like Serial.println work behind the scenes.

USART is hardware that allows two or more devices to communicate. In this instance, we're interested in one particular mode of the USART called asynchronous mode. This mode uses two wires to allow communication between two devices. One wire is used to receive data and the other to send data. Pins 0 and 1 on the Arduino Uno, which receive (RX) and transmit (TX) respectively, are used for this type of communication. Also for convenience the Arduino has a Serial-to-USB chip, separate from the ATmega328p, which converts serial data communicated over pin 0 and 1 into something that can be transmitted over USB, which is what allows the Arduino to connect to a computer and use the Arduino IDE.

How can two devices communicate?

Let's look at an example. We might keep a wire HIGH permanently when communication isn't occuring. If we want to start transmitting data, we bring it LOW for one second to indicate to the receiver that communication is about to begin. Then we set the wire HIGH or LOW depending on what the particular bit we want to transmit is, and leave it at that for a second, and then repeat that until we've transmitted 8 bits after 8 seconds. Finally, after the data has been transmitted, we go HIGH to indicate the transmission has finished and either stay HIGH or go LOW again to transmit another byte of data.

With this method, we have transmitted 8 bits in a "frame".

One way some protocols achieve this is by having a separate "clock" wire. A clock wire operates like the Arduino Uno's crystal oscillator, in that it toggles on and off at a set frequency. 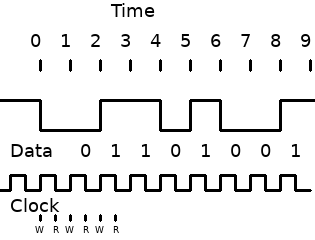 USART uses no clock wire that both devices can see. This saves the need for a third wire, but adds the problem of synchronising the two devices. The way this synchronisation is achieved is through both devices having their own internal clock, and both being set to the same rate.

This is why the Serial.begin command is needed and why the Arduino IDE's Serial Monitor prints gibberish if you set the wrong rate. In my example above that didn't include a clock wire, the communication only occurs if both devices read/write every second. If the device receiving data instead read every 1.5 seconds, for example, then the sender's data wouldn't be recieved.

This is taken from p223 of the ATmega328p datasheet, showing how USART sends bits. USART can send a different number of bits each frame, but in the above example, it sends nine bits (0 to 8). At the end of the frame, it can either idle or immediately send another frame.

You'll notice it works almost the same as my example of how eight bits could be sent. The one difference is the addition of the parity bit. This isn't something we'll be using in this article, but it is used to help check whether the data bits were sent correctly -- it tells the recepient whether the intended transmission is even or odd.

Now that we've explored how Serial works behind the scenes, we can now learn how to use USART directly. Here is an example program that repeatedly sends the character 'A' using the USART:

Before we breakdown this program, let's cover what registers we are using.

UCSR0A/B/C are three USART Control and Status Registers. They allow us to configure the USART mode, whether transmitting and receiving are enabled, the number of data bits, whether we use a parity bit, and so on. They also give us information, such as whether it's ready for new data or whether it has transmitted the data it was previously given.

UBRR0 is a 16-bit value contained in two registers UBRR0L and UBRR0H, like we saw with TCNT1. The value it contains controls the baudrate.

UDR0 is used to both hold the data we want to send and read any data we've been sent. Behind the scenes, this label actually refers to two different 8-bit registers, but which we access depends on whether we read or write to that label. If we set UDR0 to a value, then we're setting the USART Transmit Data Buffer Register. If we read from UDR0, we're reading from the USART Receive Data Buffer Register.

NOTE: In the above program, there are some configuration options that we're not setting because they're already set as we want by default. For example, the USART is by default set to asynchronous mode. This article isn't intended to be an indepth guide to everything about USART. If you're interested in going deeper into what these options are, the datasheet has the answers.

This configures the baudrate to 9600. What to set this value to would be confusing, with us having to crunch numbers into a formula from the datasheet, but thankfully the datasheet also contains a large table of common clock rates and the value to use for particular baudrates on p241. As we discovered in a previous article, the Arduino Uno runs the 328p at 16Mhz, so all we need to do is look at the relevant section of the table and use those values.

This sets the three bits that determine the number of data bits. Like in previous cases, it's unclear why these three bits are spread across two registers -- presumably a hardware design reason.

Here we loop continuously until the UDRE0 bit is 1. This bit is automatically set to 1 when the USART is ready for the new data.

Serial Monitor uses ASCII, which basically translates the 8-bit value we send into its associated character. In this instance, 65 relates to the character 'A'. You can see which values relate to which characters by looking in the ASCII table.

Since this series is about understanding how things work on a hardware level, we can use everything we've learned in this article to transmit data without using USART and instead using digitalWrite and delayMicroseconds. We can do with software what USART did with hardware.

This should repeatedly print 'A' to the Serial Monitor. To prove this isn't a fluke, you can change the transmitted data to print other characters. For example, if you change the HIGHs and LOWs so it transmits 66 or 0b01000010, it will print 'B' repeatedly.

End of the series?

I originally intended to go further with this series, but then I got a job as a tester and learning about the ATmega328p was no longer my priority. So while I've put these posts up, and it was fun to work this stuff out, you can consider this the end of Behind the Libraries.